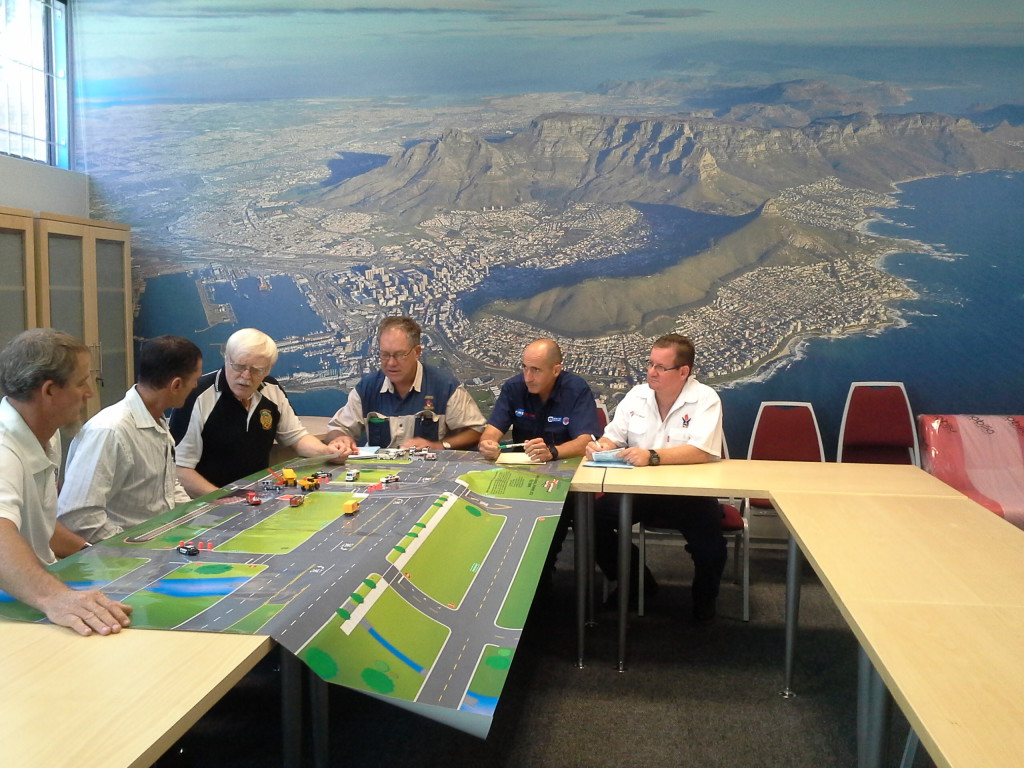 Developed in the United States where it became the national incident response system after the 9/11 terrorist attacks, NIMS & ICS have been steadily rolled out in South Africa since being introduced in the country in 2004 by the Kishugu group, which implements government’s Working on Fire (WoF) programme.

The system was implemented in South Africa for the first time on a major scale to combat the Cape Town fires that laid waste to large tracts of fynbos and forests in Table Mountain National Park and surrounding areas. Reflecting widespread public praise for the work of firefighters and support teams, Western Cape Premier Helen Zille said NIMS & ICS have enabled personnel, facilities and equipment from different agencies to be integrated into a common organisational structure. This level of coordination “was simply not there” when Cape Town had to fight its last major fire back in 2000, she said.

ICS has been adopted by the Western Cape Disaster Management Centre (WCDMC), the City of Cape Town, and provincial district municipalities and was used to combat wildland fires that broke out in many parts of the province soon after the Cape Town conflagration. On another level, ICS has been used to manage events such as the Cape Town Cycle Tour.

“ICS has been embraced by public and private organisations across South Africa, including provincial disaster management centres, municipalities, forestry companies, Fire Protection Associations, SANPARKS, and conservation agencies,” says Fred Favard, managing director of WoF Training which together with US Forest Service experts conducts accredited ICS training courses funded by the US Agency for International Development (USAID) and the US Forest Service. A total of 3,742 people have attended ICS accredited training courses conducted by South African and US Forest Service instructors since 2004, adds Favard.

With growing numbers of agencies adopting ICS, the South African ICS Working Team representing public and private organisations exposed to fire and other major risks hopes that ICS will soon be incorporated in national standards for managing disasters and become the country’s all-hazards response system. “ICS has been operationalised in South Africa and we hope it will soon be institutionalised,” says Favard. In addition to the US, ICS has been adopted in Canada, Australia and New Zealand.

USAID is extending its support for ICS training to other southern African countries, starting in Botswana, Namibia and Zambia, says Tim Murphy, deputy fire operations specialist for the US Forest Service and technical programme manager for USAID NIMS initiatives in southern Africa. In what he describes as a “monumental development”, a South African ICS team provided extensive support to Malawi authorities during the country’s recent devastating floods.

WoF Training describes NIMS & ICS as “a systematic, proactive approach guiding organisations at all levels of government and the private sector to prepare for, prevent, respond to, recover from and mitigate the effects of incidents, regardless of the cause, size, location or complexity”.

ICS, which Murphy jokingly refers to as “It’s Common Sense”, is based on four principles:

A frequent visitor to South Africa, Murphy and US colleagues were back in the country recently to conduct Incident Commander, Area Command and Multi-Agency Coordination (MAC) training courses hosted by WoF Training and WCDMC. The courses were attended by senior officials from WCDMC, the City of Cape Town, Cape Nature, Overberg Fire Dept., the national Department of Forestry, the Eastern Cape and Free State umbrella fire protection associations, and the Letaba Fire Protection Association in Mpumalanga.

WCDMC deputy director Etienne du Toit, who attended the MAC course, describes ICS as “the best system for managing incidents”. ICS, he says, is “flexible, modular and scalable. It enables different agencies to speak a common language and integrates all communications during emergencies and non-emergencies, such as management of major public events.

“It enables comprehensive resource management. By sharing resources among different agencies, you avoid duplication and save costs. We are not where we want to be with ICS but we are moving strongly in the right direction”.

Also at the course, Ian Schnetler, Chief Fire Officer, City of Cape Town Fire and Rescue Services, was the Incident Commander during the Cape Town fires, He and his Incident Management Team coordinated services ranging from City fire and rescue, disaster management, metro police and emergency medical and technical support units, WoF, conservation agencies including Table Mountain National Park and Cape Nature, volunteer firefighters, the SPCA and fire and rescue services from other parts of the Western Cape.

“Unlike the situation in 2000, on this occasion every agency knew precisely what its function was,” says Schnetler. “ICS enabled us to put operational requirements in place quickly, without which you risk having chaos. We had to work a lot on instinct in 2000, but this time we received quality communications from all agencies on the ground and we had a comprehensive overview of what was happening. This made operational decision making much easier.”

Schnetler believes the City will extend ICS to all of its emergency and public order agencies. “We need to train more people so that we can develop a number of incident management teams because ICS can be used in any incident, from fires through to traffic jams and big events.”

Jan de Villiers, chairperson of the Free State Umbrella Fire Protection Association, says his organisation has adopted ICS and members have received training. “We have 63 fire protection associations and we aim to rationalise the number by merging some of them. We then want to roll out ICS to all associations.”

“We hope that by using a common system in which all officers have a clear understanding of their roles and how they fit into the overall system, emergency services will be able to work together to take on any disaster or incident,” says Favard.

As Mike McPartland, deputy chief of New York City Fire Department 1st Division, put it during a US Forest Service sponsored training in South Africa recently: “Imagine if all agencies responding to an emergency in South Africa were on exactly the same page. Imagine if agencies from every town and province had a common understanding of how an incident should be managed and could seamlessly work together. That’s what we hope NIMS & ICS will bring to South Africa.”