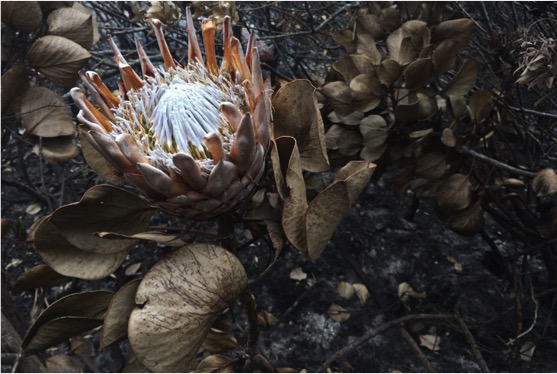 The king of proteas takes a roasting. ©Anton Crone

Fire is a rebirth for the ecosystem, without which the system winds down and dies

Walking through the ashes of Table Mountain National Park after last week’s monumental fire, I didn’t expect to see it as a landscape teeming with life, and yet it was. The sensation was one mixed with awe at the devastation, and wonder at the nature that has survived or is already emerging. For 5 days the fire raged through 5,500 hectares of the Cape Peninsula with strong winds and extreme temperatures making it difficult for fire fighters to control. Table Mountain National Park was by far the most affected area, a pristine environment which is home to about 2,000 species of plants – more than the entire British Isles.

But as I walked between the blackened fynbos on Silvermine, I saw a rock kestrel hovering above, no doubt tracking a rodent exposed by the lack of foliage; succulent green shoots pushed up through the ash at my feet and pink proteas were poised to blossom at the end of roasted stems.

Christian Boix, Africa Geographic’s travel director and resident ornithologist, met up with me after walking the opposite direction, towards Muizenberg. He had seen a peregrine falcon and an African marsh harrier, the latter unusual in this region, probably having flown in to capitalise on vulnerable prey. White-necked ravens had also arrived to scavenge and clean up the show. He showed me pictures of a live tortoise – a relief from the images of dead ones too encumbered to escape the flames – and he showed me insects working the flowers and millions of seeds which have been scattered after the flames.

‘When we get a fire like this our instinctual reaction is to feel a lot of sadness for the loss of our flora and fauna. But this flora is adapted to burn, it needs to burn to live,’ said Dr. Adam West from the Department of Biological sciences at UCT in a radio interview last week. ‘If fynbos doesn’t burn every 15 years or so we lose a lot of species, we lose a lot of diversity from the system and the system effectively starts to wind down and die. Fire is really important. It’s really a rebirth for the ecosystem.’

Personally, I’m excited at the opportunity to witness this rebirth: not far beneath the soil, dormant seeds triggered by the heat await the coming rains; burrowing animals and insects are re-emerging and birds are flying in to claim them. Ants scurry to reach seeds which they will bury for food, thereby aiding germination, and rodents race to beat the ants to it. But this is my layman’s sense of it.

The Lottery of Fire

As fynbos specialist Prof. Richard Cowling explains, a big lottery is currently at play. ‘There’s a whole lot of sorting going on right now in the way that fynbos regenerates. We’ve had a fire that raged over four or five days, and in some places the fire went into old, dense bush driven by strong winds. The intensity would have been phenomenal. That would have had a very different effect on regeneration to another area where the veld was less dense and the fire was burning on a cool day.’ Indeed one of the fire days was cooler and even brought a bit of rain. In contrast, on the day before, Cape Town recorded its hottest temperature in 100 years, at 42 degrees celcius.

‘A really hot fire stimulates germination of your large species’ seeds, like pincushions and buchus, that have been buried in the soil. Some might have been waiting for 50 years,’ he adds, recounting the story of a species thought extinct which suddenly re-emerged after an intensely hot fire. ‘But your smaller seeded species, your ericas and daisies, get absolutely singed by this heat, and that is why fynbos is so bogglingly diverse: each fire is unique in the effect it has on the species. It’s a lottery, a random process. You can’t predict what the fire is going to be like. And what happens after the fire is so important.’

The timing of this latest fire has been perfect for many of the plants, occurring as it did just before the rainy season. The taller plants like proteas and leucodendrons that release seeds after the fire are favoured if the rains arrive soon. But if the fire had occurred in September, for example, these seeds would lie on the soil surface right through the summer where they can be scattered by wind and eaten by rodents.

‘If we get good winter rains starting in April, then that compliment are going to germinate well. But that has another implication. What you get is a really dense over-story of proteas and leucodendrons which selectively suppresses the plants in the understory.’ This shading out of smaller plants means it is cooler there, and plants producing seeds dispersed and buried by ants are going to suffer because ants don’t venture into cool areas. Conversely, rodents like living under proteas because it is cool, it provides them with shelter from raptors and food in the way of seeds. So when the next fire comes, even if it is intensely hot, there are not enough of those hard seeds available for germination.

‘Ultimately this is a complex process,’ says Cowling. ‘The plants gamble with their seeds. Sometimes they hit it big, sometimes they don’t and there’s a local crash in the population. It’s that up and down in populations with each fire that enables this huge number of species to coexist in this small region of the Cape Peninsula.’ 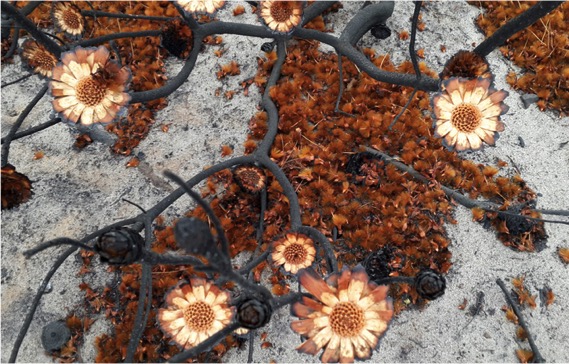 Triggered by the heat, proteas release their seeds after the fire passes. ©Simon Espley

This article was first published in Africa Geographic on 13 March 2015 – shortly after the much publicised Cape Town fires that took the southern peninsula by storm on 1 March 2015.