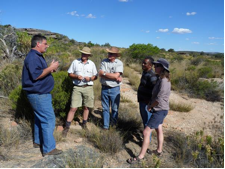 The Greater Cederberg Fire Protection Association (GCFPA) spread it’s wings once more and now also includes a portion of the Bokkeveld plateau in the Northern Cape. This is the third time in two years that the GCFPA has extended it’s borders.

The Global Environmental Fund (GEF) FynbosFire Project’s valuable resources can now be extended to the sensitive, fynbos rich district of Nieuwoudtville, which is still recovering from a mega-fire that ravaged through the farming community in December 2013. Damage in excess of R2 million was incurred when a dense old fynbos veld, over 20 years in age, was set alight by lightning.

The Bokkeveld plateau is the most northern end of the fynbos biome and, before the amalgamation, landowners were at their own mercy to combat runaway veld fires. The community is thankful to finally have the support of a FPA, and they are keen to adapt an integrated fire management system (IFM).

Resource coordination and improved fire awareness are to name just a few of the IFM tools from which new members will benefit. The first step is to instate a fire management plan so that landowners are prepared and equipped in a time of crisis.