An initiative, through funding from the GEF FynbosFire project, was started a couple of months ago to investigate the creation of a more eff 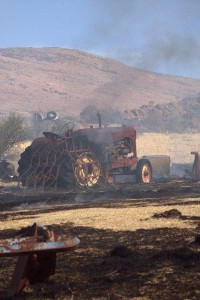 ective and sustainable FPA in the South Western part of the Sarah Baartman District of the Eastern Cape.

The investigations during this project have shown that a larger FPA in the South Western part of the Sarah Baartman District is and will be financially viable with the cooperation of all the stakeholders, if suitable and experienced people are employed to run the FPA.

Based on that premise, most of the key Eastern Cape stakeholders have now agreed to establish a larger and also more productive and financially viable FPA in this part of the Sarah Baartman District. This FPA will initially cover the local municipalities of Kouga, Koukamma and Baviaans and possibly a part of the Sundays River.

This new FPA should be up and running by not later than the end of March 2016 and an executive task team, consisting of representatives of the key stakeholders, has been appointed to ensure that all paperwork is done with approval of DAFF management. Until now, as the Eastern Cape fynbos area was lacking the cooperation between all the veld and forest fire stakeholders, some of the larger Eastern Cape landowners had joined a well organised neighbouring FPA in the Western Cape, namely the Southern Cape FPA. The team agreed that one of the key objectives will be to ensure that any landowner who is currently a member of an existing FPA in the Eastern Cape as well as those who are members of an FPA in the Western Cape will have the same FPA services or better than what they are currently getting.

This initiative, sponsored by the GEF FynbosFire project, is also fully supported by the management of the Sarah Baartman District Municipality, the provincial and national management of the Department of Agriculture, Forestry and Fisheries (who are the custodian of the Veld and Forest Fire Act), the National and Provincial Parks Board, Cape Pine/MTO forest company, GEF FynbosFire, Working on Fire and the Eastern Cape Umbrella FPA. We have also received full cooperation and support from Agri Eastern Cape, the Southern Cape FPA as well as the Eastern Cape Department of Rural Development and Agrarian Reform.

Other FPAs in the Sarah Baartman District Municipality will be given the opportunity to join this larger FPA at a later stage, so that all in that district can benefit from a larger and more financially viable FPA and the services it will have to offer its members. It has already been proven that parastatals like Sanral, Transnet and Eskom, will more likely become registered member of a larger FPA, as they do not like to deal with many smaller FPAs. Government funding would also be more easily to come by when FPAs follow the borders of Provinces and or Municipalities.

The writer can be contacted by phoning him on 072 698 9525 or by sending an email to marellmh@absamail.co.za .